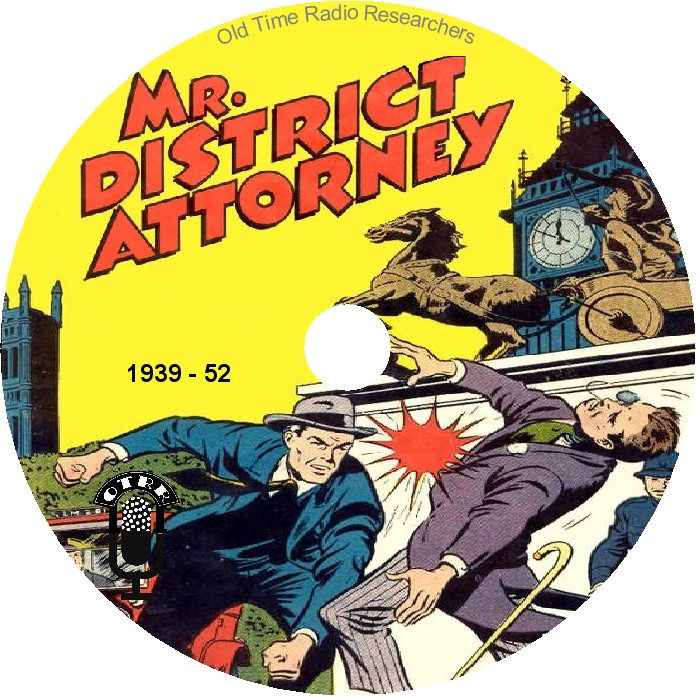 From Wikipedia, the free encyclopedia Mr. District Attorney is a popular radio crime drama, produced by Samuel Bischoff, which aired on NBC and ABC from April 3, 1939 to June 13, 1952 (and in transcribed syndication through 1953). The series focused on a crusading D.A., initially known only as "Mister District Attorney," or "Chief", and was later translated to television. On television the D.A. had a name, Paul Garrett, and the radio version picked up this name in the final years when David Brian played the role. A key figure in the dramas was the D.A.'s secretary, Edith Miller (Vicki Vola). Created, written, and directed by former law student Ed Byron, the series was inspired by the early years of New York governor Thomas E. Dewey. It was Dewey's public war against racketeering which led to his election as governor. Phillips H. Lord, creator of Gangbusters, helped to develop the concept and coined the title. Byron lent an air of accuracy and immediacy to his scripts through close study of crime statistics, a library of criminology texts, following the newspapers, and even going around rough bars to gain tips, background, and color from crooks and police alike. His techniques sometimes enabled Byron to predict major crime waves before the news broke. Produced throughout its run in New York City, the series began as a fifteen minute serial, becoming a half hour, self-contained series three months later. During 1942, Mr. District Attorney began battling Nazis, leading to conflicts with the FBI when the scripts reflected life too closely. Cast and characters: Mr. District Attorney - The nameless title role was played by several actors throughout the run, with the breakdown as follows: Dwight Weist (1939 serials); Raymond Edward Johnson (1939 half hour shows); Jay Jostyn (1940 through 1952 - Jostyn also guest starred in the role in mystery sketches for the game show Quick as a Flash); David Brian (1952-1953 syndication). Voice of the Law - The show's signature was the opening announcer, known as the "Voice of the Law," who defined the creed and duties of Mr. District Attorney. The role was played by Maurice Franklin and also Jay Jostyn, prior to taking over the lead role Miss Miller - Edith Miller was the district attorney's faithful secretary, played throughout the run by Vicki Vola Len Harrington - The D.A.'s chief investigator, a former cop; played by Walter Kinsella, who had been heard in various police roles during the early years, and by Len Doyle from 1940 onward. Other supporting players and guests on the series includeded such noted actors as Paul Stewart and Frank Lovejoy. OTRR Certification Information: Series Name: Mr. District Attorney Certification Status: OTRR Certified Accurate Certification Date: August 8, 2014 Certification Version: Version 1 Number of CDs: 3 From the Old Time Radio Researchers Group. See "Note" Section below for more information on the OTRR.